Rough greyish brown coat and is often coarse in appearance. The ears are broad and slightly rounded. The legs are relatively short, giving this deer a slightly stubby appearance. Only the males bear the lyre-shaped three-tined (points)   antlers. Antlers have been recorded growing to lengths of 110cm but more often than not lengths are usually at around 75cm.  Rusa deer stand up to 110cm in height with its weight measuring at 115kgs. 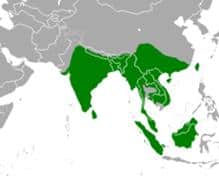