Addax are now only found in isolated pockets of the Sahara Desert in Africa. They inhabit desert san dunes and hard-packed desert terrain with little water and scant vegetation.

The Addax is a large, white/sand coloured antelope with long thin spiral horns that slant back and upward. The spiralled horns are found in both sexes, growing to about 60-109cm in length. The addax stands about 105cm at the shoulder and has large splayed hooves which, along with the well-developed dewclaws, prevent it from sinking in sand. Its coat is short and glossy; there is a white 'X'-shaped blaze on the face, and a mat of dense, dark hair on the forehead. Long hairs on the throat form a scraggly beard. An adult addax can weigh approx 135kgs. 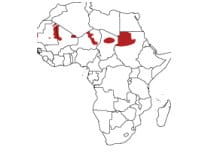