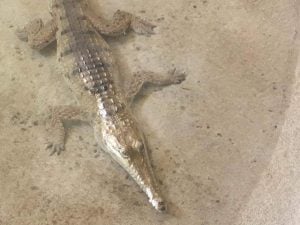 The Natural Habitat of the Freshwater “Freshie” Crocodile is in Northern Australia (Northern Territory, Queensland & Western Australia). Freshwater Crocodiles are found in various permanent freshwater areas such as lakes, billabongs and swamps, plus less saline upstream areas of river systems and creeks.

This Crocodile can grow up to 3m long at a slow rate and because of their size are not classed as “man-eaters” They have unusually narrow, tapering snouts with a mouth lined with 68-72 sharp teeth. The eyes have a special clear eyelid, which protects the eyes while underwater. They have strong legs with clawed, webbed feet and an incredibly powerful tail. The skin is usually light brown in colour, with dark bands on the body and tail.